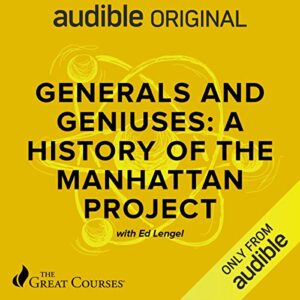 Generals and Geniuses: A History of the Manhattan Project

Boom. On July 16, 1945, a fireball erupted in the sky over a remote desert in New Mexico – and the world changed forever. That fireball was the culmination of a dramatic race to harness the power of the atom itself in order to save the world from Nazi Germany and Imperial Japan. You know this race by another name: the Manhattan Project.

In 10 riveting episodes that feel like a fast-paced thriller, acclaimed World War II historian Edward G. Lengel’s Generals and Geniuses: A History of the Manhattan Project brings the origin of the atomic bomb – and the scientific minds behind it – to vivid life. Did the Manhattan Project, and the remarkable weapon it produced, save millions of lives at the expense of the tens of thousands who died in Hiroshima and Nagasaki? And was there any way to prevent this technology from unleashing the horrors that still hang over us today? These complicated questions linger like a mushroom cloud over the story of the race to develop the world’s first atomic weapon.

Featuring a cast of characters including Enrico Fermi, Franklin Delano Roosevelt, J. Robert Oppenheimer, and Harry S. Truman, and packed with international espionage, close calls, down-to-the-wire decisions, and a race against time, The Manhattan Project blends science, history, and military strategy to reveal the truth about how the world entered the nuclear age. The story of the Manhattan Project – from the first inklings of what mankind could do with the atom to the fateful bombings of Hiroshima and Nagasaki – is, above all, a human story: one that celebrates the brilliance of scientific knowledge, the brutal struggle for freedom, and the messy ethics of the human cost of war – and victory. And it’s a story whose final chapter, as you’ll discover by the end of this remarkable series, has yet to be written.