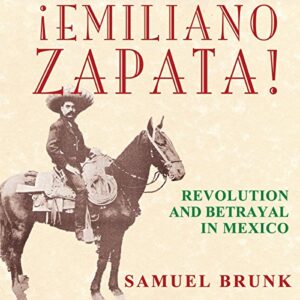 The life of Mexican revolutionary Emiliano Zapata was the stuff that legends are made of. Born and raised in a tiny village in the small south-central state of Morelos, he led an uprising in 1911 – one strand of the larger Mexican Revolution – against the regime of longtime president Porfirio Diaz. He fought not to fulfill personal ambitions but for the campesinos of Morelos, whose rights were being systematically ignored in Don Porfirio’s courts.

Expanding haciendas had been appropriating land and water for centuries in the state, but as the 20th century began things were becoming desperate. It was not long before Diaz fell. But Zapata then discovered that other national leaders – Francisco Madero, Victoriano Huerta, and Venustiano Carranza – would not put things right, and so he fought them, too. He fought for nearly a decade until, in 1919, he was gunned down in an ambush at the hacienda Chinameca.

In this new political biography of Zapata, Brunk, a noted journalist and scholar, shows us Zapata the leader as opposed to Zapata the archetypal peasant revolutionary. In previous writings on Zapata, the movement was covered, and Zapata the man got lost in the shuffle. Brunk clearly demonstrates that Zapata’s choices and actions did indeed have a historical impact.