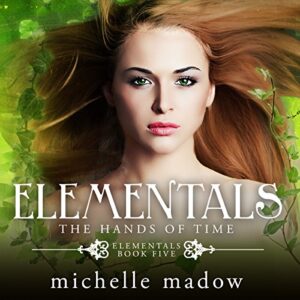 Time is running out. War will be waged. Sacrifices will be made.Months ago, Nicole Cassidy’s life was turned upside-down when she discovered that she was a witch descended from the Greek gods. She and the four other witches gifted with elemental powers fought all over the world – and in another dimension – to battle the supporters of the Titans and fight for the people they love.Now the Elementals must stop Typhon – the most dangerous monster in the world – from rising, and seal the portal to the dangerous prison world of Kerberos. But they won’t be able to do that without facing their hardest decision yet… a sacrifice so great that it may be one they’re not willing to make. Get ready for the stunning, action-packed conclusion to the bestselling Elementals series, with twists and turns that you’ll never see coming!“Michelle Madow once again proves that she is a wordsmith capable of weaving a fantastic tale of magic, adventure, romance and action. The Hands of Time is a perfect ending to the bewitching Elementals series.”-Cassie James, Goodreads Reviewer