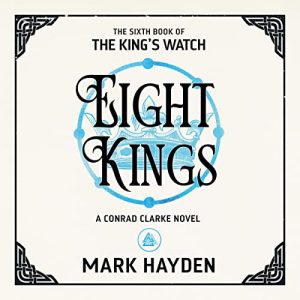 The king is dead. Long live the king.

The Mage-King of Wessex has passed away, and the stage is set for a battle royal: the richest mage in England versus the most powerful coven of witches. And Conrad finds himself in the middle.

The struggle is a civilized one at first – Lord Mowbray and the Daughters of the Goddess meet for a conference in Mowbray’s Mage Palace of Pellacombe, with Conrad, Mina, and Saffron sent to see fair play. Until first tragedy and then murder plunge the staff kingdom of Wessex into a dangerous crisis, and Conrad has to draw on all his team’s powers and his own experience to avoid a bloodbath.

The sixth installment of Mark Hayden’s The King’s Watch is a deep study of power at the sharp end, where families and clans are stretched beyond breaking point in the brutal world of magick.

Grab yourself a copy of Eight Kings, and immerse yourself in the addictive world of the King’s Watch.

Kings and Sorcerers: A Short Story

The Madness of Kings