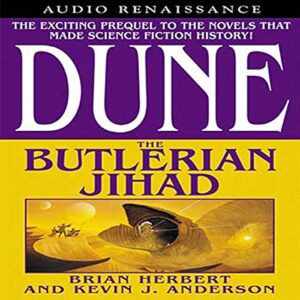 Frank Herbert’s Dune is one of the grandest epics in the annals of imaginative literature. Decades after his original novels, the saga was continued by Herbert’s son, Brian, in collaboration with Kevin J. Anderson. Now Herbert and Anderson, working from Frank Herbert’s own notes, reveal a pivotal epoch in the history of the Dune universe: the Butlerian Jihad, the war that was fought ten thousand years before the events of Dune – the war in which humans wrested their freedom from “thinking machines.”

We learn of the betrayal that made mortal enemies of House Atreides and House Harkonnen. Herein are the foundations of the Bene Gesserit Sisterhood, the Suk Doctors, the Order of Mentats, and the mysteriously altered Navigators of the Spacing Guild. Here is the amazing tale of the Zensunni Wanderers and here, too, is the planet of Arrakis, where traders have discovered the remarkable properties of the spice melange…

To emerge victorious over their brutal adversaries in the Jihad, the human race and its leaders have only the weapons of imagination, compassion, and the capacity for love. It will have to be enough.