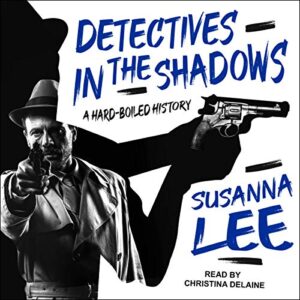 Steadfast in fighting crime, but operating outside the police force – and sometimes even the law – is the private detective. Driven by his own moral code, he is a shadowy figure in a trench coat standing on a street corner, his face most likely obscured by a tilted fedora, a lit cigarette dangling from his hand. The hard-boiled detective is known by his dark past, private pain, and powers of deduction. He only asks questions – never answers them. In his stories he is both the main character and the narrator.

America has had a love affair with the hard-boiled detective since the 1920s, when Prohibition called into question who really stood on the right and wrong side of the law. And nowhere did this hero shine more than in crime fiction. In Detectives in the Shadows, literary and cultural critic Susanna Lee tracks the evolution of this truly American character type – from Race Williams to Philip Marlowe and from Mike Hammer to Jessica Jones.

Lee explores how this character type morphs to fit an increasingly troubled world, offering compelling interpretations of The Wire, True Detective, and Jessica Jones. Suddenly, in the present day, the hard-boiled detective wears his – or her – fatigue outwardly, revealing more vulnerability than ever before. But the detective remains resolute in the face of sinister forces, ever the person of honor.

The Power of Vulnerability