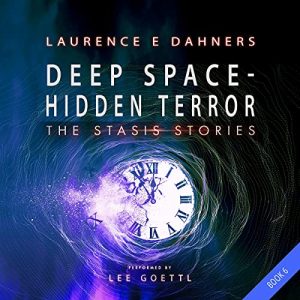 This hard sci-fi novel is the sixth book in the Stasis Stories, a series of optimistic tales of technological innovation in the near future. They follow Kaem Seba, a young man with extraordinary math talents. With his friends, he’s come up with a device that allows time to be stopped within limited volumes of space-time.

In this sixth story, the company Kaem, Arya Vaii, and Gunnar Schmidt founded to commercially develop his time-stopping discovery is working with NASA to move into deep space.

Using the space tower from book five, they launch large payloads into orbit to start building a rotating wheel space station and launch a successor to the James Webb Space Telescope. Then, they put a space-launch tower on the moon that’s aimed at sending craft all over the solar system.

Unbeknownst to them, the Haliq, a race of aliens in the Epsilon Eridani system is launching its own ships to the Sol system with the intent of finding more space for their burgeoning population. When they arrive, they’re alarmed to find intelligent beings in the system they’ve come to populate, but their obvious solution is to exterminate the problematic humans.

The aliens have an advanced technology that lets them jump across interstellar and interplanetary space.

But they don’t have stasis….

A Tower in Space-Time

A Pause in Space-Time: Publisher’s Pack: The Stasis Stories, Books 1-2

Dark Fleet: The Secret Nazi Space Program and the Battle for the Solar System

How to Die in Space