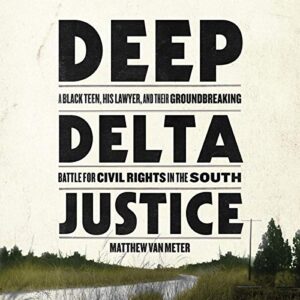 The “[A]rresting, astonishing history” of one lawyer and his defendant who together achieved a “[C]ivil rights milestone” (Justin Driver).

In 1966 in a small town in Louisiana, a 19-year-old black man named Gary Duncan pulled his car off the road to stop a fight. Duncan was arrested a few minutes later for the crime of putting his hand on the arm of a white child. Rather than accepting his fate, Duncan found Richard Sobol, a brilliant, 29-year-old lawyer from New York who was the only white attorney at “the most radical law firm” in New Orleans. Against them stood one of the most powerful white supremacists in the South, a man called simply “The Judge”. In this powerful work of character-driven history, journalist Matthew Van Meter vividly brings alive how a seemingly minor incident brought massive, systemic change to the criminal justice system. Using first-person interviews, in-depth research, and a deep knowledge of the law, Van Meter shows how Gary Duncan’s insistence on seeking justice empowered generations of defendants – disproportionately poor and black – to demand fair trials. Duncan v. Louisiana changed American law, but first it changed the lives of those who litigated it.

Devil in the Grove

Civics, Law, and Justice – How We Became U.S.