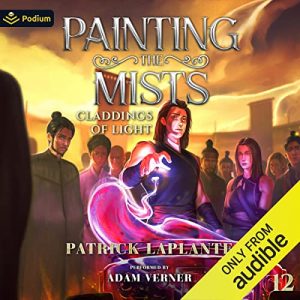 The Burning Lake Prefecture has declared war on the demon lands. The human invaders are mighty, and even Stargazer City’s new seer can’t stop them. Cha Ming would love to help, but his hands are tied. He has a death match to attend and only six months to prepare.

To survive, he’ll need to awaken his divine blood using the Iridescent Phoenix’s inheritance. But such a precious treasure is not easy to obtain. Cha Ming’s competitors are strong and have been preparing all their lives. They wield alchemical skills that exceed his own and iridescent flames that turn emotions into reality.

Cha Ming’s friends fight to buy him as much time as they can, because should he win the death match, he will take control of the Burning Lake Prefecture. Should he lose, however, not only will he and Huxian die, but every demon tribe in the north will be forced to surrender or perish.

Crown of the Starry Sky

Dungeons of the Divine

Into the Dying Light

One thought on “Claddings of Light”