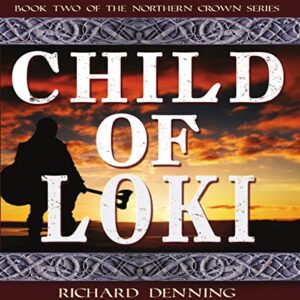 A divided land…. a divided family.

The Battle of Catraeth has been won and Cerdic’s homeland is safe… but for how long? The Northern British were crushed but yet more enemies have risen to replace them. Soon Cerdic and his friends must go to war again – against the Scots and Picts north of Hadrian’s wall. He goes to help his country’s allies – the Bernicians – under their great warlord, Aethelfrith.

But what is Aethelfrith’s true design? How ambitious is he and how far will he go to fulfil his dreams? And what is Cerdic’s treacherous half-brother Hussa up to in these fierce wild lands?

All Cerdic wants is to be left to live out his life in peace.

But Loki, it seems, has other ideas.

The Northern Crown series follows the story of a young nobleman – Cerdic – as he lives through the darkest years of the Dark Ages. Through his eyes we witness the climatic events that forged the nations of Britain. For it out of this time that the English, Welsh, Irish, and Scots races began to form: born in the conflict between Saxon and Celt, Pagan and Christian. Listen Child of Loki.