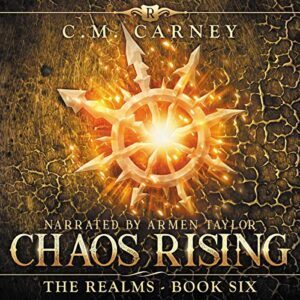 Book six of the best-selling Epic LitRPG series The Realms.

Even the gods fear the rise of chaos.

War is coming to the realms, and only Gryph and the power of his Godhead can prevent the apocalypse. With his loyal NPC Lex at his side, Gryph races to rescue a spy with information critical to the survival of his people.

A spy who happens to be Gryph’s younger sister.

But when an unknown foe rips Gryph from the Realms, Lex must lead a rag-tag bunch of companions to find the one man who can get Gryph back.

Their quest has barely begun, when Lex discovers that the Princes of Chaos have turned their malevolent eyes on the Mortal Realms. And where their gaze falls, destruction follows.

Can Lex and his allies prevent an extra-dimensional invasion in time to save Gryph? Or will chaos rise?

Click “Buy Now” to continue your quest into the number one best-selling Epic LitRPG/GameLit Fantasy series.

LitRPG/GameLit is genre that incorporates gaming elements from tabletop roleplaying games like Dungeons and Dragons and Pathfinder with epic RPG video games like The Elder Scrolls: Skyrim and MMO’s like World of Warcraft and sets them in a fantasy or science fiction setting. It generally has leveling, skill progressions, crafting and base building. If you’re new to LitRPG or GameLit, then The Realms is the perfect place to start. Prepare to lose sleep. You have been warned.

Number one best seller in Dungeons and Dragons Gaming