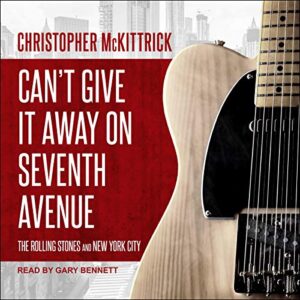 When the Rolling Stones first arrived at JFK Airport in June 1964, they hadn’t even had a hit record in America. By the end of the decade, they were mobbed by packed audiences at Madison Square Garden and were the toast of New York City’s media and celebrity scene.

More than 50 years later, the history of New York City and the Rolling Stones have entwined and paralleled, with the group playing in nearly all of the Big Apple’s legendary venues. Along the way Mick Jagger, Keith Richards, and the rest of the Stones have left an impact on the culture of the city, from the turbulent “Fun City” of the 1960s and ’70s through the 21st century. The evolving career of the Stones has often reflected the cultural changes of the city, as the Stones and their music were the center of social and political controversies during the same era that New York faced similar challenges.

Can’t Give It Away on Seventh Avenue: The Rolling Stones and New York City explores the history of the group through the prism of New York. It is a highly detailed document of the dynamic and reciprocal relationship between the world’s most famous band and America’s most famous city as well as an absorbing chronicle of the remarkable impact the city has had on the band’s music and career.

The Hate U Give