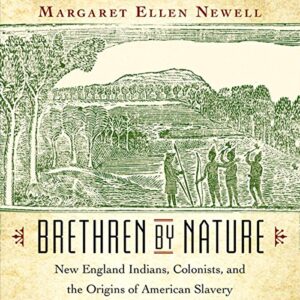 In Brethren by Nature, Margaret Ellen Newell reveals a little-known aspect of American history: English colonists in New England enslaved thousands of Indians. Massachusetts became the first English colony to legalize slavery in 1641, and the colonists’ desire for slaves shaped the major New England Indian wars, including the Pequot War of 1637, King Philip’s War of 1675-76, and the northeastern Wabanaki conflicts of 1676-1749.

Newell also explains how slavery linked the fate of Africans and Indians. The trade in Indian captives connected New England to Caribbean and Atlantic slave economies. Indians labored on sugar plantations in Jamaica, tended fields in the Azores, and rowed English naval galleys in Tangier. Indian slaves outnumbered Africans within New England before 1700, but the balance soon shifted. Fearful of the growing African population, local governments stripped Indian and African servants and slaves of legal rights and personal freedoms.