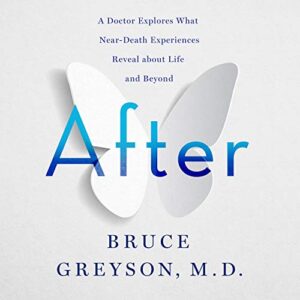 This program includes three bonus interviews with the author.

The world’s leading expert on near-death experiences reveals his journey toward rethinking the nature of death, life, and the continuity of consciousness.

Cases of remarkable experiences on the threshold of death have been reported since ancient times, and are described today by 10% of people whose hearts stop. The medical world has generally ignored these “near-death experiences”, dismissing them as “tricks of the brain” or wishful thinking. But after his patients started describing events that he could not just sweep under the rug, Dr. Bruce Greyson began to investigate.

As a physician without a religious belief system, he approached near-death experiences from a scientific perspective. In After, he shares the transformative lessons he has learned over four decades of research. Our culture has tended to view dying as the end of our consciousness, the end of our existence – a dreaded prospect that for many people evokes fear and anxiety.

But Dr. Greyson shows how scientific revelations about the dying process can support an alternative theory. Dying could be the threshold between one form of consciousness and another, not an ending but a transition. This new perspective on the nature of death can transform the fear of dying that pervades our culture into a healthy view of it as one more milestone in the course of our lives. After challenges us to open our minds to these experiences and to what they can teach us, and in so doing, expand our understanding of consciousness and of what it means to be human.

Dear Life: A Doctor’s Story of Love and Loss

The Math of Life and Death

The Mind: Consciousness, Prediction, and the Brain

Morgue: A Life in Death

A Matter of Life and Death