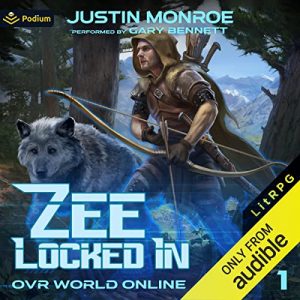 In the bleak, not-too-distant future, most people who could fled to the virtual reality OVR World Online.

Zachary “Zee” Jones will never be able to afford to become a player of the game. After committing a crime in order to save his mother’s life, he was arrested and included in the Inmate Player Program. Even without perception filters to limit his pain, it was better than the alternative. He has the opportunity to earn more money in a five-year sentence then he could have in his entire life as a hospital janitor.

Zee is jacked into Gygax, a high fantasy adventure game world, filled with knights, magic, and monsters. But Zee quickly learns that just because the world is virtual doesn’t mean the danger isn’t real. Can he find his fortune, perhaps a few allies, avoid the dangers of adventuring as an inmate, and unravel the mystery behind the game’s confounding sentient computer program wearing a familiar face called “the doctor”?