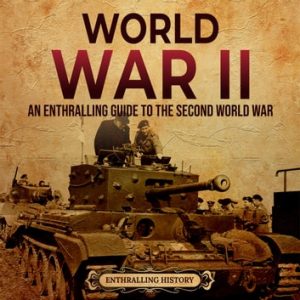 Regardless of how much has been written about it, new information continues to be discovered about the thousands of events that make up the six years that shaped the world we live in today.

WWII is inextricably linked with Hitler and the Nazis; however, there is so much more to discover. In this audiobook, learn about the major events that transpired around the world to create a perfect storm that allowed Hitler to rise to power.

As the somewhat shaky peace of the post-war world begins to crumble and tensions begin to brew once more in Europe, it might be more important than ever to learn from the past.

This audiobook will provide an overview of the war and will take an in-depth look at some topics like:

How the end of the First World War helped lead to the Second World War.
Hitler’s rise to power.
Conflicts and rumblings in Africa and Asia.
The Holocaust.
War of ideologies.
The staggering number of casualties.
The major battles of the war and how they impacted the war effort.
And much, much more!

A Political History of the World

The Complete Idiot’s Guide to World War I