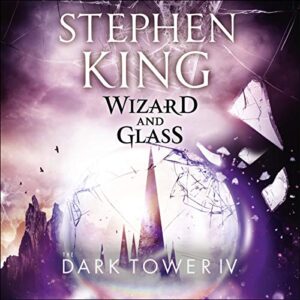 Soon to be a major motion picture starring Matthew McConaughey and Idris Elba!

In this fourth volume, Roland, Eddie, Susannah, and Jake survive Blaine the Mono’s final crash, only to find themselves stranded in an alternate version of Topeka, Kansas, one that has been ravaged by the superflu virus. While following the deserted I-70 toward a distant glass palace, Roland recounts a story about a seaside town called Hambry, where he fell in love with a girl named Susan Delgado, and where he and his old tet-mates Alain and Cuthbert battled the forces of John Farson, the harrier who – with a little help from a seeing sphere called Maerlyn’s Grapefruit – ignited Mid-World’s final war.

The Girl of Hawthorn and Glass

Through the Looking Glass