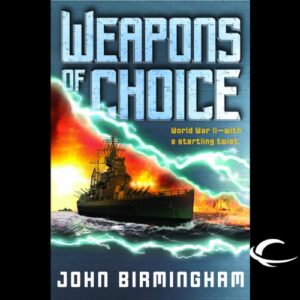 The impossible has spawned the unthinkable. In 2021, a quantum military experiment goes horrifically wrong. A multinational taskforce of ultra-modern warships is suddenly transported back in time to 1942…right into the path of the U.S. naval battle group bound for Midway Atoll.

History is rewritten in an instant as the future smashes into the past, and high-tech hardware goes head to head with World War Two technology. In the chaos that ensues, thousands are killed, but the maelstrom has only just begun. The veterans of Pearl Harbor have never seen a helicopter, or a cruise missile – let alone nanotechnology, ceramic bullets, and F22 Raptor stealth jetfighters.

Allied and Axis forces are then caught in a desperate struggle to gain the upper hand – each hoping to tip the balance with a fist full of 21st-century firepower. What happens next is anybody’s guess – and everybody’s nightmare.