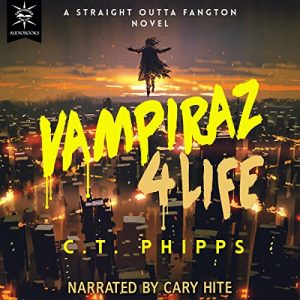 From the best-selling author of the Supervillainy Saga

It’s been a rough year for Peter Stone.

Vampires are not meant to be quarantined, and most of the nation is under lockdown. It has been extra hard in the city of New Detroit, which depends on tourism not only for its economy but its blood supply. With his creator kidnapped, mother dead, and finding himself once more exiled to the fringes of their society, Peter’s ready to call it quits. That’s when he receives a mysterious message from a long-dead friend who tells him that his problems are just beginning.

A mysterious new player in town wants to recruit Peter to help form a supernatural alliance against the oppressive new voivode and his human-hunter allies. Unfortunately, Hell itself has sent an assassin to erase our antihero, and even a new set of allies may not be enough to protect him.

Part of the United States of Monsters universe with the Bright Falls Mysteries, Psycho Killers in Love, Morgan Detective Agency, and The Red Room.