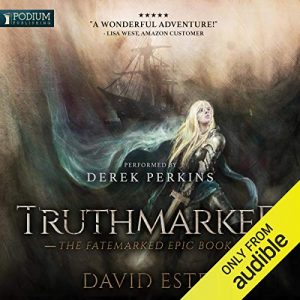 The Hundred Years War rages on, with tensions between kingdoms growing ever more strained.

While Annise Gäric and her forces march on Castle Hill to retake the northern throne, her cousin, Rhea Loren, wages a naval war against Blackstone. Meanwhile, Roan Loren and Gwendolyn Storm struggle to breach the gnarled, vine-choked undergrowth of the Tangle in their quest to reach Knight’s End and learn more of the true purpose of the fatemarked.

In the south, a Calypsian empress is murdered, and her daughters fight to claim the empire and wage a civil war against their estranged father’s armies. In Phanes, slavery runs rampant while a rebel group fights to free the oppressed people. A master named Jai Jiroux looks to help the rebel cause, an act of treason punishable by death.

Surrounding the Four Kingdoms is the pall cast by the Kings’ Bane, who continues his quest to kill eight rulers and thus fulfill the Western Oracle’s ancient prophecy, which he believes will pave to way to peace across the realms.