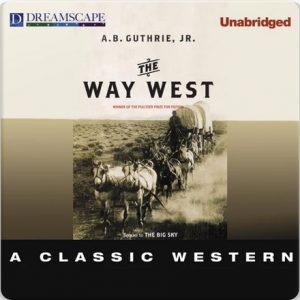 The Way West, a 1948 winner of the Pulitzer Prize for Fiction, continues the epic adventure begun in A.B. Guthrie Jr.’s The Big Sky. This thrilling sequel reunites us with the wise and paternal mountain man Dick Summers, who agrees to pilot a wagon train full of “greenhorns” on a harrowing journey from Missouri to Oregon. The passengers confront not only the wild grandeur of the untamed west, but also their own reasons for leaving everything behind. Summers, along with his charges, struggle with the imperfect reality of their long held dreams. The Way West deftly achieves what many other westerns attempt – an unsentimental account of westward expansion. Resolve is tested, nature is conquered, and men are made or unmade in this timeless classic.

The King of the West

Monkey King: Journey to the West

Lost to the West