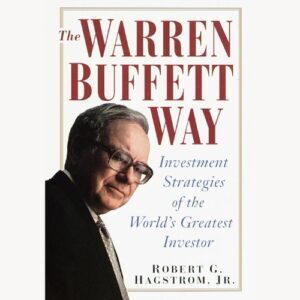 Warren Buffett remains one of the most sought-after and watched figures in business today. He has become a billionaire and investment sage by buying chunks of companies and holding onto them, managing them as businesses, and eventually reaping huge profits for himself and investors in Berkshire Hathaway. The first two editions of The Warren Buffett Way gave investors their first in-depth look at the innovative investment and business strategies behind the spectacular success of living legend Warren E. Buffett. Tracing Warren Buffett’s career from the beginning, Hagstrom told listeners exactly how, starting with an initial investment of only $100 Buffett built a business empire and has an estimated net worth of $44 billion. The Third Edition of The Warren Buffett Way will focus on the timeless principles and strategies behind Buffett’s extraordinary investment success. There will be new chapters on the important distinctions between investment and trading and an examination of the most successful disciples of Warren Buffett. Some less important material will be deleted and the overall focus will be to create an edition that will stand the test of time, distilling Buffett’s success formula in a way that will provide value to listeners for decades to come.

Stocks for the Long Run