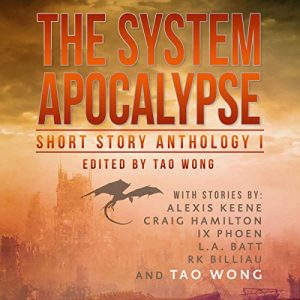 A bounty hunting survivor. A Galactic dark elf. A woman who has given up her humanity to become something more.

These stories and more are available in the first short story anthology for the System Apocalypse, covering year one on Earth. When the world ends, humanity steps up, finding new ways to survive in a world with classes, magic, and monsters. The anthology features exciting, new stories by five new writers and a new, never publicly released short story by Tao Wong.

The System Apocalypse world was first introduced in ‘Life in the North’ and is a LitRPG science fiction and fantasy post-apocalyptic work that features monsters, science fiction technology, character sheets, supernatural races and ancient myths in one heady, LitRPG brew

Stories and writers featured in this anthology include:

Craig Hamilton – “Hunting Monsters” has our protagonist doing what he does best. Finding those who would exploit the System and the people within. Except this time, there are even more complications than normal.

Alexis Keane – “Tooth and Claw” is a heart-warming tale of friendship that knows no bounds of race or distance.

Ix Phoen – “Rebel Within” tells a tale of hardship in South America, where the monsters are not always the ones outside the walls.

Tao Wong – “Debts & Dances” covers the arrival of the System from the perspective of our favorite Truinnar Lord.

R.K. Billiau – “Phoenix Rising” covers an unconventional hero, one whose mind is slipping from him before the apocalypse. Will the apocalypse be his salvation? Or doom?

L.A. Batt – “Overture to Obliteration” brings us to far-off New Zealand to glimpse the wreckage the System has wrought.

The Wehrwolf: A Short Story

A Change of Plans: A Short Story

The Very Best of the Best