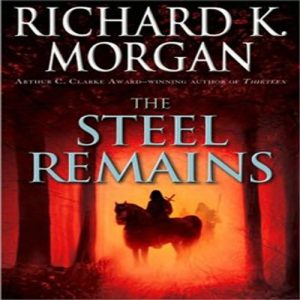 In just a few short years, Richard K. Morgan has vaulted to the pinnacle of the science fiction world. Now he turns his iconoclastic talents to epic fantasy, crafting a darkly violent, tautly plotted adventure sure to thrill old fans and captivate new readers.

A dark lord will rise. Such is the prophecy that dogs the footsteps of Ringil Eskiath – Gil, for short – a washed-up mercenary and onetime war hero whose world-weary cynicism is surpassed only by the quickness of his temper and the speed of his sword. That sword, forged by a vanished eldritch race known as the Kiriath, has brought him unlooked-for notoriety, as has his habit of poking his nose where it doesn’t belong.

Gil is estranged from his aristocratic family, but that doesn’t stop his mother from enlisting his help in freeing a cousin sold into slavery. Grumbling all the way, Gil sets out to track her down. But it soon becomes apparent that more is at stake than the fate of one luckless young woman. Grim sorceries that have not been seen for centuries are awakening in the land. Some speak in whispers of the return of an all-but-legendary race known as the Aldrain, cruel yet beautiful demons feared even by the Kiriath.

Now Gil and two old comrades are all that stand in the way of a prophecy whose fulfillment will drown an entire world in blood. But with heroes like these, the cure is likely to be worse than the disease.

Kings and Sorcerers: A Short Story