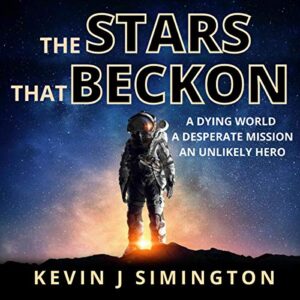 A dying world. A desperate mission. An unlikely hero.

In the normal course of events, Zac Perryman was destined to live an unremarkable life and die without leaving more than the faintest ripple in the ocean of humanity’s existence. But the normal course of events was about to be rudely interrupted. As he slept past his alarm on a warm February morning, events were conspiring to derail his ordinary life and sweep him up into a tsunami of cosmic proportions.

Zac becomes part of ragged band of desperate survivors who flee from a dying Earth in search of a new home. Leaving behind a planet that has been decimated by global catastrophe, they set course for a distant star system on board mankind’s only surviving starship. But the universe plays a cruel joke on them. Awakening from cryogenic stasis, they discover that they have not only travelled through space, but through time as well. Now facing even deadlier threats from a strange world, their battle for survival is only just beginning. An exciting, intelligent, fast-paced adventure that spans the galaxy.

If you enjoyed the movies The Martian, Ad Astra, Passengers, Supernova, or Interstellar, you will love this book! Similarly, if you enjoyed the books Children of Time, Winter World, The Enceladus Mission, or any of the classic space-exploration stories by sci-fi masters such as Isaac Asimov, Robert Heinlein, and Arthur C Clarke, then this is the book for you!