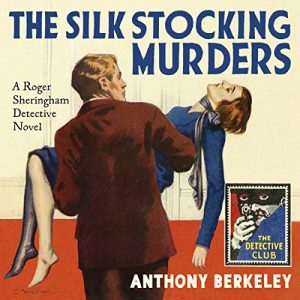 Investigating the disappearance of a vicar’s daughter in London, the popular novelist and amateur detective Roger Sheringham is shocked to discover that the girl is already dead, found hanging from a screw by her own silk stocking. Reports of similar deaths across the capital strengthen his conviction that this is no suicide cult but the work of a homicidal maniac out for vengeance – a desperate situation requiring desperate measures.

Having established Roger Sheringham as a brilliant but headstrong young sleuth who frequently made mistakes, trusted the wrong people and imbibed considerable liquid refreshment, Anthony Berkeley took his controversial character into much darker territory with The Silk Stocking Murders, a sensational novel about gruesome serial killings by an apparent psychopath bent on targeting vulnerable young women.