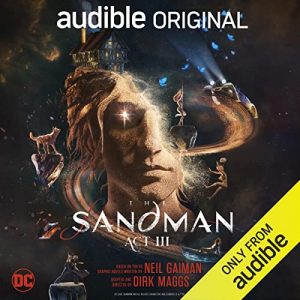 In Act III, we follow Morpheus on a grand journey to take care of family business. He visits with his son Orpheus (Bridgerton’s Regé-Jean Page), an act that brings with it profound consequences. Accompanied by Delirium (Kristen Schaal, Bob’s Burgers), he tracks down their estranged brother, Destruction (David Harewood, Supergirl), the only member of the Endless ever to abandon their post. And at an inn at the intersection of all worlds, a group of travelers are forced together by a storm that threatens to destroy reality itself, with grave repercussions for Morpheus and the rest of the Endless.

All the original cast returns, including Kat Dennings as Death, Aidan Turner as Cluracan, and Neil Gaiman himself as The Narrator, joined by Harewood and other new cast members Wil Wheaton (Star Trek: The Next Generation), KJ Apa (Riverdale), Shruti Haasan (Race Gurram), and more.

It’s time to close your eyes and listen. Once again.

Please note: This content is not for kids. It is for mature audiences only. Just like the original graphic novels, this audio adaptation contains explicit language and graphic violence, as well as strong sexual content and themes. Discretion is advised.

The Neil Gaiman at the End of the Universe

The Monarch of the Glen