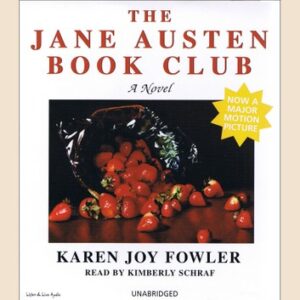 A sublime comedy of contemporary manners, this is the novel Jane Austen might well have written had she lived in twenty-first- century California.Nothing ever moves in a straight line in Karen Joy Fowler’s fiction, and in her latest, the complex dance of modern love has never been so devious or so much fun. Six Californians join to discuss Jane Austen’s novels. Over the six months they meet, marriages are tested, affairs begin, unsuitable arrangements become suitable, and love happens. With her finely sighted eye for the frailties of human behavior and her finely tuned ear for the absurdities of social intercourse, Fowler has never been wittier nor her characters more appealing.The result is a delicious dissection of modern relationships. Dedicated Austenites will delight in unearthing the echoes of Austen that run through the novel, but most readers will simply enjoy the vision and voice that, despite two centuries of separation, unite two great writers of brilliant social comedy.