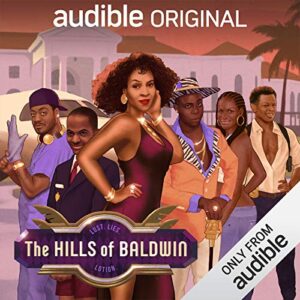 Featuring an all-star, all African American cast from the hit improv troupe The Black Version, this completely improvised, unscripted, and utterly unwoke soap opera takes place in Baldwin Hills – aka the black Beverly Hills – where wealthy CPAs live next to big-time rappers and NBA superstars. A place where no money scam is too short and no weave is too long. Now, sit back and listen as we take you to the lavish lifestyles and the perfect pettiness of The Hills of Baldwin.

Meet the Bourgeois family, the most wealthy and powerful clan of conniving schemers in all of Baldwin Hills, CA. High above Los Angeles in their palatial mansion, the Bourgeoises bask in luxury and vie for control of the Fine Swine skincare empire. Dark secrets from the past bubble up to the surface, and before long somebody winds up dead. Who is getting stabbed in the back? Who is doing the stabbing? What other secrets will refuse to stay buried?

It’s like Empire, Real Housewives, and The Young and the Restless mixed together, but with even more drama, cattiness, and absurdity…and without a script! The cast of The Black Version (the long-running improv show from the legendary Groundlings Theatre) jumped into the studio without a road map or a safety net to make up an entire soap opera on the fly and off the chain. Pop some champagne and some popcorn, because it’s poppin’ off on…The Hills of Baldwin!

You Had Me at Hola