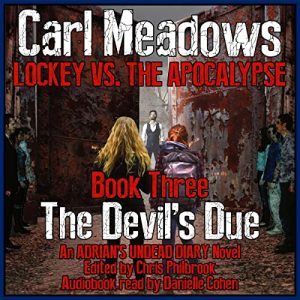 The stunning conclusion to Erin Locke’s trilogy has arrived.

Lockey’s community continues to expand, but clashes with other survivors increase with equal intensity. Reunited with old friends and new ones accepted into their fold, things take a dark turn when the Nomads take a personal interest in Lockey. Selected by some unknowable force to lead one of humanity’s last bastions of defense in a global war against the dead, the Dark will use any weapon to ensure her failure.

As Lockey and Nate search for the final member of their mystical trio, their dreams haunted by ghosts of the fallen, the Nomad threat intensifies, putting Lockey’s heart through its most fearsome crucible yet.

Despite the eruption of conflict with the Nomads, Lockey’s confrontation with Maddock is inevitable, as both are marked as champions for the powerful forces at play. Countless lives depend on the outcome; one a burning flame of hope for humanity’s continuing survival, the other a menacing general of the dead. Only by dethroning Maddock can Lockey and Nate’s community have a chance to build something better from the ruins of their shattered world.

For the survivors caught in the crossfire, the stakes could not be higher; hope for a future, or a spiral into dark oblivion.

Because one way or another, the Devil will get his due.

Supervolcano: All Fall Down