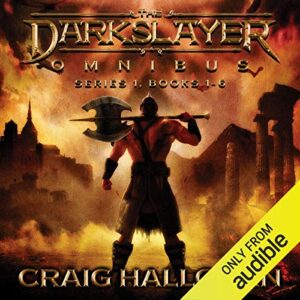 They want him dead, but he won’t die.

On a volatile, savage world, there is one who is unknowingly charged with maintaining the delicate balance between light and darkness: the warrior Venir, the Darkslayer. Girded with the mantle of power called the Armament, Venir hunts down the insidious race of underlings that will stop at nothing to dominate humanity.

When Venir and his thief companion, Melegal, lock horns with entitled Royals during an innocent night of carousing in the City of Bone, they are forced to flee or die in the dungeons. The troublesome pair seeks refuge in the harsh Outlands where monsters, dwarfs, gnolls, and ogres dwell. Lying in wait, two powerful underling wizards have set a trap to destroy the scourge of their kind once and for all.

With his enemies closing in from all directions, the Darkslayer and his companions have no choice but to fight or see their home descend into total chaos and devastation.

Fans of R.A. Salvatore’s Drizzt Do’ Urden, Frizt Leiber’s Fafhrd and the Gray Mouser, David Gemmell’s Druss the Legend, the Witcher, Raymond E. Feist’s Pug the Wizard, and Robert E. Howard’s Conan, delight in the Darkslayer series…perhaps you will as well.