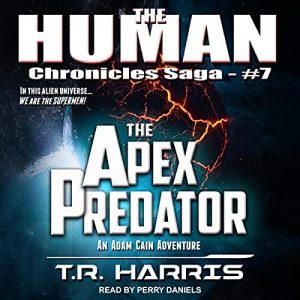 Having placed a bounty on the heads of the alien Klin and Kracori races, humanity must now face the desperate wrath of mankind’s worst enemies, who have once again joined forces for a preemptive strike against the Earth. Their plan is brilliant…and only the special abilities of ex-Navy SEAL Adam Cain can save the planet.

It’s a frantic race against time, as Adam and Sherri Valentine arrive on Earth just in time to help mount a ragtag defense against the Kracori fleet. But will it be enough?

Meanwhile, Riyad Tarazi is on his own, carrying out the dangerous assignment of verifying the location of the Kracori homeworld of Elision. Riyad soon discovers he’s in the middle of a hornet’s nest of deadly aliens, every bit the equal of the human supermen. Will he succeed, or will he become just another casualty of a galaxy growing ever more hostile to mankind?

In addition, the evil Englishman Nigel McCarthy is up his old tricks as well, and his actions resurrect the sleeping giant of the Juireans. It’s the last thing the humans need is another deadly alien race devoted to their destruction.

A Galaxy to Conquer