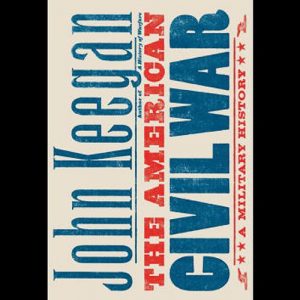 For the past half century, John Keegan, the greatest military historian of our time, has been returning to the scenes of America’s most bloody and wrenching war to ponder its lingering conundrums: the continuation of fighting for four years between such vastly mismatched sides; the dogged persistence of ill-trained, ill-equipped, and often malnourished combatants; the effective absence of decisive battles among some two to three hundred known to us by name.

Now Keegan examines these and other puzzles with a peerless understanding of warfare, uncovering dimensions of the conflict that have eluded earlier historiography.

While offering original and perceptive insights into psychology, ideology, demographics, and economics, Keegan reveals the war’s hidden shape – a consequence of leadership, the evolution of strategic logic, and, above all, geography, the Rosetta Stone of his legendary decipherments of all great battles.

The American topography, Keegan argues, presented a battle space of complexity and challenges virtually unmatched before or since. Out of a succession of mythic but chaotic engagements, he weaves an irresistible narrative illuminated with comparisons to the Napoleonic Wars, the First World War, and other conflicts.

The American Civil War is sure to be hailed as a definitive account of its eternally fascinating subject.

The Civil War: A Narrative, Volume I

The Civil War: A Narrative, Vol. 2

The Civil War: A Narrative, Vol. 3