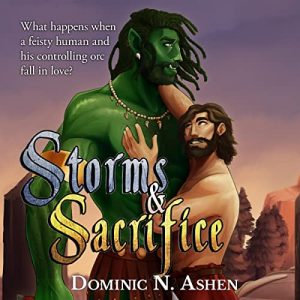 Will love be enough to save them from the coming storm?

After a rocky start, David is settling into his new life with Khazak, the orc who is his… Owner? Friend? Lover? He’s still figuring that out, and with his friends in jail for the next two months, he’s got time. Or at least he will when he’s not working with Khazak and the other rangers to keep the city of V’rok’sh Tah’lj safe. It would also be nice if the weird dreams he’s been having would stop. He’s done a lot of growing (and not just emotionally), but he can’t say this is where he saw himself winding up after leaving the knight academy. At least it’s only temporary, right?

For his part, Khazak has been all too happy to have David around. It’s not that his life was boring, he was just used to his routine before the troublesome human entered his life and shook things up. Now he has someone to talk to, share his meals with; they’re even working together. Plus, he finally has someone to take to the upcoming Uzu’gor festival like he’s always wanted. Unfortunately, what starts with a simple robbery leads to the uncovering of a plot far more sinister, one that threatens not just the limited time he has left with David, but the entire city.

The House of Sacrifice: Empires of Dust, Book 3

Storms of My Grandchildren