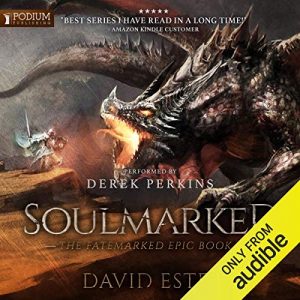 Despite the efforts of several of the fatemarked, turmoil and violence continue to plague the Four Kingdoms.

To the north, Annise Gäric ventures into the Hinterlands to discover the truth of the Sleeping Knights, who may be the only hope for her kingdom. Meanwhile, Tarin Sheary travels to Darrin in a desperate bid to repel the eastern forces amassing at Crow’s Nest. Unbeknownst to either of them, a new threat rises in Blackstone.

In the west, Rhea Loren seeks to ransom her prisoners, Gareth Ironclad and Gwendolyn Storm, which will bring her one step closer to her goal of controlling the fatemarked. Relying on her ability to summon the ancient sea creature, Wrathos, she seeks to unify her people while persuading them that the child growing inside her was placed there directly by Wrath.

With his fatemarked sister in tow, Grey Arris sails toward Pirate’s Peril in search of the truth about Shae’s marking and the cause of her recurring dream of a pirate.

In the southern empire of Phanes, a slave rebellion is brewing, with Jai Jiroux and Shanti Parthena Laude at its core. But the Hoza brothers will not relinquish their power without a fight.

Finally, in Calyp, Raven Sandes’ dragonia are growing, and she must decide whether to use them against the east, who continue to attack her desert borders. Simultaneously, Roan Loren shows up at her palace with an offer she cannot refuse, as he strives to learn the truth of the Western Oracle’s prophecies and the origins of the fatemarked.

As always, Bane is lurking in the shadows with his new partner, Chavos the plaguemarked, plotting how to destroy those who would stand in the path of peace.

Seven Deaths of an Empire