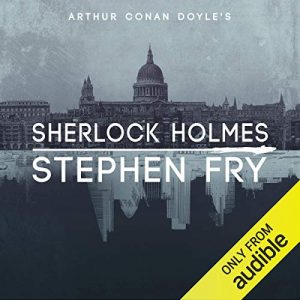 “Fry’s Holmes is crisp and high-handed, his Watson enthusiastic and bemused, and the rest of the narration colorful without being mannered. Have fun. Winner of AudioFile Earphones Award.” (AudioFile magazine)

“…it was reading the Sherlock Holmes stories as a boy that first turned me on to the power of writing and storytelling.” (Stephen Fry)

Ever since he made his first appearance in A Study In Scarlet, Sherlock Holmes has enthralled millions of fans. Now Audible is proud to present Arthur Conan Doyle’s Sherlock Holmes, read by Stephen Fry. A lifelong fan of Doyle’s detective fiction, Fry has narrated the complete works of Sherlock Holmes. And, exclusively for Audible, Stephen has written and narrated nine insightful and personal introductions to each title.

Fry is an English actor, screenwriter, author, playwright, journalist, comedian, film director and all round national treasure. He is the acclaimed narrator of The Hitchhiker’s Guide to the Galaxy and recently recorded The Tales of Max Carrados – which earned Fry the accolade of “quite irresistible” from the Washington Post.

The Return of Sherlock Holmes

In League with Sherlock Holmes