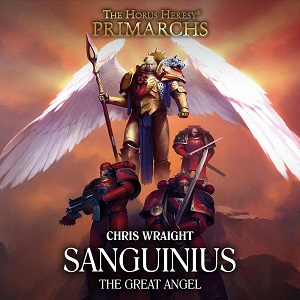 “I have always been the master of wretches, and have learned from that. I am a wretch myself, a non-standard. To purify and to transform – that has been our gift.”

Sanguinius, the very image of an angel, has chosen to obscure the origins of his Legion, and prevents outsiders from setting foot on his home world. A remembrancer attempts to discover why.

Listen to it because…

The 17th instalment of the Horus Heresy Primarchs series offers a glimpse of the Blood Angels Legion – and its celebrated primarch – from the outside, as we peer into the shrouded secrets of its past.

Sanguinius is the Great Angel, most beloved of all the primarchs, his mighty exploits celebrated throughout the entire Imperium as the Crusade expands into the void. And yet the origins of his Legion are shrouded in mystery and rumour, his unique physical form is an enigma, and his perilous home world remains off-limits to all but his own secretive people.

When a discredited remembrancer arrives with the expeditionary fleets to chronicle the primarch’s deeds, he has to work hard to uncover the truth behind the legends. As he accompanies the \\IX Legion to war against the enemies of the Emperor, the curious scholar comes to learn much more than he expected – not just about the subjects of his study, but also the nature of the Imperium itself.