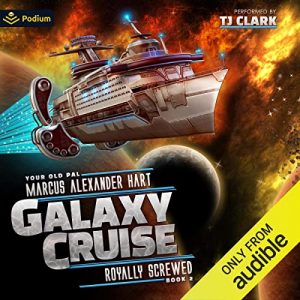 After generations of conflict, an arranged marriage is set to unite two feuding royal families and bring peace to their worlds. But when bungling Captain Leo MacGavin botches the bride and groom’s first meeting, the wedding is off, and so is the truce!

To stop an interplanetary war, Leo needs to make a royal love connection, and fast! But when he seeks help from his confidante Kellybean, he inadvertently sabotages her budding relationship as well. To further complicate matters, his ship is on the verge of catastrophic failure, his first officer is weaponizing the safety gear, and his acting head of hospitality is a sociopath who keeps maiming the guests.

When Leo’s old flame makes a mysterious reappearance, can she help him unite the nuptial-bound nemeses, or is the whole galaxy royally screwed?

Glitter in the Stars