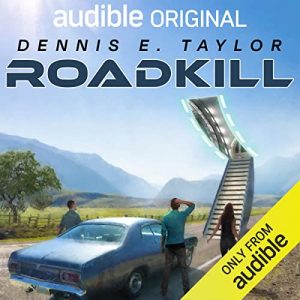 Three 20-somethings are all that stands between an otherworldly threat and the survival of Earth in the latest thrill ride by Dennis E. Taylor, author of the Audible and New York Times best-selling Bobiverse series.

Jack Kernigan is having a bad day…a bad year…a bad life. After being booted out of MIT, he’s back in his Ohio hometown, working for the family business, facing a life of mediocrity. Then one day, out on a delivery, his truck hits…something. Something big…something furry…something invisible. And, it turns out, something not of this Earth.

Fate can play funny tricks. Which is why Jack suddenly finds himself the planet’s best hope to unravel a conspiracy of galactic proportions that could spell the end of the human race. All Jack and his best friends, Natalie and Patrick, have to defeat an alien threat is their wits, a lot of coffee, and a rather snippy AI named Sheldon. Plus, their own spaceship.

After all, if you’re going to rescue the world, the least you can get out of it is your own spaceship.

For We Are Many

We Are Legion (We Are Bob)

A Change of Plans