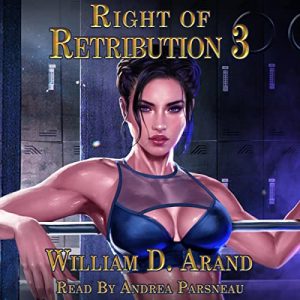 He got up, went to work, forced people to balance their scales—either through taking lives or forced penance—went home, spent time with his daughter, slept with one of his girlfriends, and went to sleep.

Life was the furthest thing from mundane that it could ever be.

Warner’s life had changed when his daughter had been nearly fatally injured, plunging Warner into a world of paranormal creatures, monsters, and magic that he’d never known existed.

Then he came out the other side as the arbiter of Retribution. He now personally hands out justice to any and all he comes across.

Warner has been using his powers considerably since then. Cutting down all who would stand before him and attempt to stop him in his personal crusade.

The price he had to pay for such a power cost him his life. He was forced to the point of giving all of himself to redeem the original holder of the right of Retribution, Warin.

Warner was quick to pay that price.

His effort was paid back to him in triplicate when Warin willingly passed the mantle to him. Giving all of what he was to Warner, effectively ending his life.

Now Warner is the holder of the rights for Vengeance, Retribution, and Redemption.

Each power has recognized him and responds willingly, allowing him to blend all three of them with growing mastery.

Long gone are the days of being sick after utilizing them.

Now the only concern Warner faces is the correct usage of those powers and when to use them.

The world is an ever-shifting gray area that gets murkier by the year.

The great change that’d been on the horizon is now upon the world. A change that will cast the entirety of existence into shadow or bring it back to stability.

A reckoning no one wished for has arrived.

The very world stands on the edge of a knife, waiting to see who will prevail.