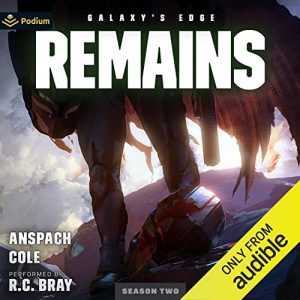 The Legion has landed….

The Republic world of Kima has fallen with shocking speed to the renewed forces of the Mid-Core Rebellion, and General Chhun must lead the rebuilt and enhanced 131st Legion – along with Marines, Dark Ops, Navy, and Kimbrin Resistance – onto the planet to violently check their assault.

But timing is of the essence, and Chhun can’t do it alone. Bear, working undercover, unearths the treachery of a resurgent Nether Ops still working their dark influence from the shadows. Masters has his hands full just staying alive while he evades deadly pursuers. And Keel finds himself swept up in intrigues that may make the planetary takeover of Kima all but insignificant.

The battle is fierce and hard, but victory is always within reach so long as the Legion – remade to its initial purpose – remains to fight.

The Remains of the Day

The Beauty of What Remains