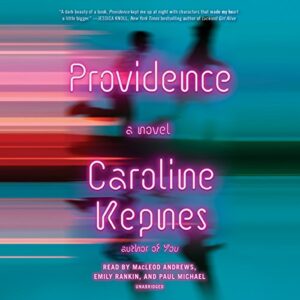 “A dark beauty of a book, Providence kept me up at night with characters that made my heart a little bigger.” (Jessica Knoll, New York Times best-selling author of Luckiest Girl Alive)

A propulsive novel that’s part love story, part detective story, and part supernatural thriller – from the acclaimed author of You, whose work Stephen King describes as “hypnotic and totally original”

Best friends in small-town New Hampshire, Jon and Chloe share a bond so intense that it borders on the mystical. But before Jon can declare his love for his soul mate, he is kidnapped, his plans for a normal life permanently dashed.

Four years later, Chloe has finally given up hope of ever seeing Jon again. Then, a few months before graduation, Jon reappears. But he is different now: bigger, stronger, and with no memory of the time he was gone. Jon wants to pick up where he and Chloe left off…until the horrifying instant he realizes that he possesses strange powers that pose a grave threat to everyone he cares for. Afraid of hurting Chloe, Jon runs away, embarking on a journey for answers.

Meanwhile, in Providence, Rhode Island, healthy college students and townies with no connection to one another are suddenly, inexplicably dropping dead. A troubled detective prone to unexplainable hunches, Charles “Eggs” DeBenedictus suspects there’s a serial killer at work. But when he starts asking questions, Eggs is plunged into a whodunit worthy of his most outlandish obsessions.

In this dazzling new novel – and with an intense, mesmerizing voice – Caroline Kepnes makes keen and powerful observations about human connection and how love and identity can dangerously blur together.

I Wanna Be Where You Are