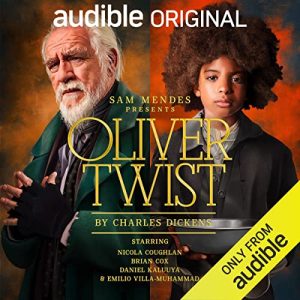 The classic tale in 3D, like you’ve never heard it before.

Orphaned at birth, Oliver Twist is born into the grimmest of 19th century English workhouses with a life of grinding poverty ahead of him. But the boy is a fighter and after being evicted from the workhouse for asking for ‘more’ and surviving a stint as an undertaker’s assistant, he walks many miles to London and finds a whole new life with a gang of young pickpockets led by the Artful Dodger and their guardian Fagin.

Oliver’s adventures are only beginning as he finds his way into the home of wealthy Mr. Brownlow. Even there he is not safe, for Fagin and his even more dangerous colleague, the thief Bill Sikes, seek to snatch him back and lead him deeper into a life of crime. Only Nancy, Bill Sikes’ girlfriend, can ensure Oliver’s future safety, even if that puts her own life at risk. Full of twists and turns, the story moves towards a dramatic climax when murder prompts a manhunt and a final confrontation with the forces threatening Oliver’s future.

So put your headphones on, sit back and listen as this 19th century classic is brought to the most vivid, cinematic life in an epic, immersive audio drama.

A Twist of Fate

A Twist in Time