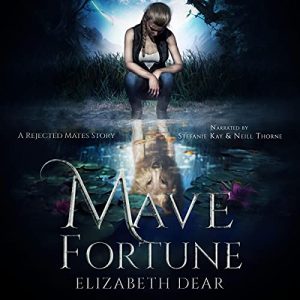 When my family left our small, ultra-conservative pack back in Utah to join a giant pack in Northwest Louisiana, I thought I’d be able to coast through my last year of high school in semi-anonymity, then get the f–k away from wolf pack politics and just live my life for awhile. But the Moon decided to prolong my torture by placing my fated mate in front of my face on my first day at Blackstone Academy. He’s the Alpha’s son and king of a school crawling with shifters, and it turns out he doesn’t care to be saddled with a Moon-chosen mate who he thinks is a nobody omega wolf.

When he rejects me in front of every shifter in school, I vow to harden my heart, become impervious to the constant, deep hurt of the rejection, and figure out how to be the first wolf in known history to shake the taint of a rejected fated mate bond.

I’m also becoming closer to a new student – a smoking hot and intriguing human, who I can’t manage to scare off even with the drama that surrounds me and the poisonous pack politics that I can’t seem to escape. I can’t even tell him what’s really going on, but I think he’s keeping secrets from me, too.

I’m Mave Fortune, and my mate threw me out like yesterday’s garbage. But f–k that guy.

Note: This is a new adult, M/F stand-alone story with a HEA. Any future audiobooks in the series will feature other characters. Mave is intended for the 18+ crowd and contains foul language, some mild violence, and steamy scenes. If you’re a fan of upper YA/NA, wolf shifters, academy romances, and all of the associated tropes, this audiobook is for you!

Lost Books of the Bible: The Great Rejected Texts