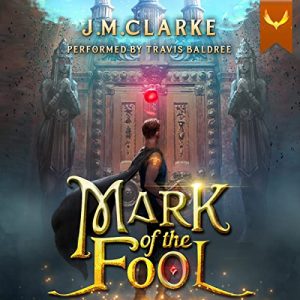 The gods chose him. He said no.

After his parents died, Alex Roth had one desire: become a wizard. Through hard work, he was accepted into the University of Generasi, the world’s greatest academy of wizardry….

Fate, however, had another plan.

On his 18th birthday, he is Marked by prophecy as one of his kingdom’s five Heroes, chosen to fight the Ravener, his land’s great enemy. But his brand is “The Fool”. Worst of the marks.

Rather than die or serve other Heroes like past Fools, he takes a stand, rejects divine decree…and leaves. With his little sister, his childhood friend, and her cerberus, Alex flees for the university, hoping to research the mystery of the Ravener. He’ll make lifelong friends, learn magic from mad wizards, practice alchemy, fight mana vampires, and try to pay tuition.

There’s one small problem. The Mark insists on preventing the Fool from learning and casting spells, while enhancing skills outside of divinity, combat, and spellcraft…that is, unless he learns to exploit the hell out of it.

With nearly 10 million views on Royal Road, this popular web serial has been completely revised and relaunched into this definitive version now coming to Audible, narrated by Travis Baldree!