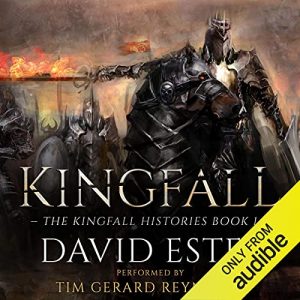 Warring kingdoms. Ancient blades. Dragonriders and godlings. A growing evil that threatens to destroy the world. Don’t miss the highly anticipated follow-up series to the number one Amazon best-selling saga, The Fatemarked Epic.

Infused with magic, shadows and starlight, the powerful godblades were believed to be lost nearly half a millennia ago, when the Godswar ended. Now, however, one has been found by the unlikeliest of wielders: Sampson Gaard, a blind but ambitious prince with something to prove.

The only question is whether he controls the blade or the blade him. With an insidious evil lurking in the shadows, the answer may very well determine the fate of all Kingfall.

The Kingfall Histories takes place on a different continent in the same world as The Fatemarked Epic. Fans of The Fatemarked Epic, The Stormlight Archives and Legends of the First Empire will fall in love with the world of Kingfall.