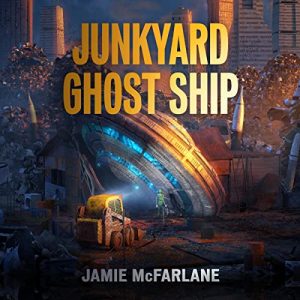 A flying saucer’s crash-landing is just the beginning of a race against time to save innocent aliens from a devious plot.

Albert Jenkins and his friends have enjoyed several months of peace, which is why when a Rosengul spaceship crash-lands into his new house, he’s not exactly surprised.

From the wreckage, a pair of ordinarily reclusive small Rosengul emerge and spin a tale of kidnapping and deceit. Of course, AJ, not always the most sensitive, asks the pertinent question of how that involves him and his friends. The simple answer is that AJ and crew have developed a reputation of getting things done, probably because his methods skirt Galactic Empire rules. Someone has been kidnapping Rosengul aliens, and their government is either unable to chase down the problem or unwilling to try.

But before AJ can even get a full description of the problem, a team of heavily armed human commandos fast rope their way into the middle of Darnell’s backyard barbeque. Having brought barbeque sauce to a gunfight, AJ and his team are easily overcome, leaving Doctor Jayne seriously injured.

If AJ wasn’t invested before the commandos arrived, hurting his fiancé was a great way to drag him into the fight. The biggest question is: Will he have to fight Army Intelligence, or will they finally join forces for the benefit of all?

Junkyard Ghostship is an action-packed race across the galaxy that will keep you up listening late into the night.

The Fallen Ship: Rise of the Gia Rebellion