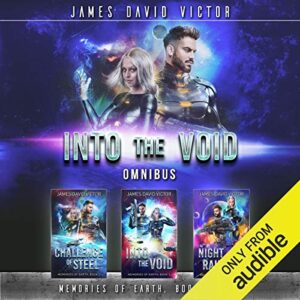 In a world of genetic engineering, fantastic aliens, and faster-than-light travel, conspiracies and the quest for unlimited power can still tear the galaxy apart.

Anders Corsigon has spent his life bringing galactic criminals to justice. When a bizarre murder turns into a string of assassinations, he must find a killer who is protected by the highest levels of the empire. After being cast aside by the empire he faithfully served, his only allies will be a rogue simulated intelligence, an alien spy, and a fugitive engineer. In a world where advanced genetic engineering can literally rewrite humanity, they must uncover a truth that could destroy the galaxy.

Download the Into the Void Omnibus and start your next fantastic space adventure today!