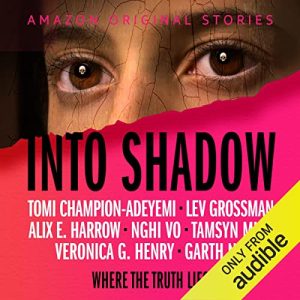 Some truths are carefully concealed; others merely forgotten. In this spellbinding collection, seven acclaimed fantasy authors create characters who venture into the depths where others fear to tread. But when forbidden knowledge is the ultimate power, how far can they go before the darkness consumes them?

The Garden by Tomi Champion-Adeyemi

In this dreamlike short story told in alternating prose and verse, number one New York Times bestselling author Tomi Champion-Adeyemi weaves a tale of a young woman’s journey to find her mother and uncover her secrets.

A teenage nobody crosses a line that will change her life forever in this short coming-of-age story by number one New York Times bestselling author Lev Grossman.

The Six Deaths of the Saint by Alix E. Harrow

The Saint of War spares the life of a servant girl so she can fulfill her destiny as the kingdom’s greatest warrior in this short story of love and loyalty by New York Times bestselling author Alix E. Harrow.

What the Dead Know by Nghi Vo

A woman posing as a medium who can channel the spirit world comes face to face with the truth in this short historical fantasy by Hugo Award–winning author Nghi Vo.

When a stranger comes to town, secrets are sure to come out. New York Times bestselling author Tamsyn Muir spins a twisty—and twisted—short story of revenge and survival.

The Candles Are Burning by Veronica G. Henry

Amid the modern trappings of 1950s Savannah, an ancient evil threatens a young widow and her daughter in this chilling short story by award-winning author Veronica G. Henry.

Out of the Mirror, Darkness by Garth Nix

A cynical “fixer” for a silent-film studio must confront the shadows behind the bright lights in this noir-tinged short story by New York Times bestselling author Garth Nix.

The Once and Future Witches