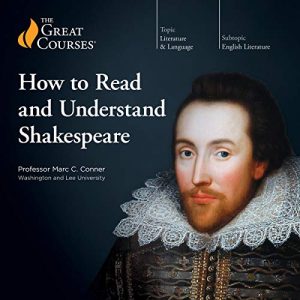 Shakespeare’s works are among the greatest of humanity’s cultural expressions and, as such, demand to be experienced and understood.

But, simply put, Shakespeare is difficult. His language and culture – those of Elizabethan England – are greatly different from our own, and his poetry, thick with metaphorical imagery and double meanings, can be hard to penetrate.

Yet the keys to understanding Shakespeare are written into the plays themselves. If you can learn to recognize the playwright’s own clues, you’ll become able to engage meaningfully with his language, to follow the plot structures and themes that drive his plays, and to track the development of his characters.

Over the course of 24 lectures, this innovative and penetrating exploration of Shakespeare’s plays reveals how to enter Shakespeare’s dramatic world, how to grasp what’s happening in any of his plays, and how to enjoy them fully both on the page and the stage.

Under Professor Conner’s expert guidance, shaped by decades of studying and performing Shakespeare, you learn more than 40 interpretive tools, drawn from the texts themselves, that give you direct insight into the plays. These guiding principles allow you to follow the narratives of the plays as they unfold, with a clear understanding of how the plays function and fit together.

The professor also reveals fascinating details of Shakespeare’s era, which shed further light on the plays and the way his contemporary audiences perceived them.

This course builds the skills that allow you to reach your own understanding of the plays – to deeply comprehend Shakespeare’s transcendent poetic language, the spellbinding world of his great characters and stories, and his revelatory reflections on human experience.

How to Listen to and Understand Great Music